We, here at Austin Serve, were excited when we saw “The Other 51” theme for 2015 because it’s sort of what we’ve been doing here ever since we started in 2011. One of our stated goals for our site is to be a launching pad for young people to go back to their home contexts and home church as havoc-wreakers for the Kingdom. We recognize that one of our roles in our family of churches is to be a bit of a research and development (R&D) outpost on the front lines of Kingdom mission and so we not only want to invite young people into that experience but to give them ammunition to take that back to where they came from.

One of the things we tried this year during our Spring Break Serve (which was the first Serve of the 2015 season), was to use the tools afforded to us by Asset-Based Community Development (ABCD). ABCD was a concept developed in the early 90’s and used extensively in mission environments which try to help empower people rather than just do things for them. ABCD recognizes the image of God in all people and helps everyone play a role in community development rather than having the “haves” do the work and the “have nots” learn to be dependent. As facilitators of short-term missions, I think this should be especially important to us because they always run the risk of becoming “hit-and-run” scenarios.

So, in addition to giving them context for all of our worksites, we spent one of our evening sessions doing some community asset mapping. The process is super simple and it helps groups think through the connection between what they’re doing on your site and what they’ll do when they get home.

Step One: Ask kids to gather with their own churches, rather than their small groups. If it’s a good-sized church, split it into groups of 6 or so.

Step Two: Have the group brainstorm assets of the area five miles around where they live and five miles around where the church is located. Suggest some based on what people come up with – things like vehicles, farming knowledge, etc. are often not seen as assets at first. Write each asset on a Post-It and have them stick them to the board on the left (of the three). Challenge each student to come up with at least 3.

Step Three: Have the group brainstorm needs of the same five-mile areas or city centers, if necessary and write their ideas Post-It notes, sticking them to the board on the right side (of the three). You may have to get the ball rolling with some suggestions. (This activity is often harder for people who come from rural or more affluent communities where needs are not as forefront).

Step Four: Read as many of the Post-It’s out loud. There’s bound to be some humorous ones. Then ask the kids to use their groups to throw out some tangible projects that could use the resources of the community to meet the needs in the community. Be as creative as possible. Our Host Team also formed a group and just took an outsider’s crack at combining the two lists – which worked really well.

This process not only gets people thinking about assets and needs in their community but it also begs the question: why isn’t your church already doing these things? Use that as a springboard to talk about some real things that a youth group or church could tackle in the next 6 months. Talk about what role serving the community has in their youth group back home or their church back home.

Some good stuff is bound to bubble up! 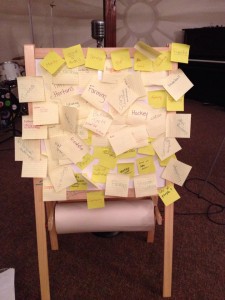 If you’ve got more questions, please feel free to contact Mark at mark@sunriseaustin.org or @markhilbelink on Twitter.